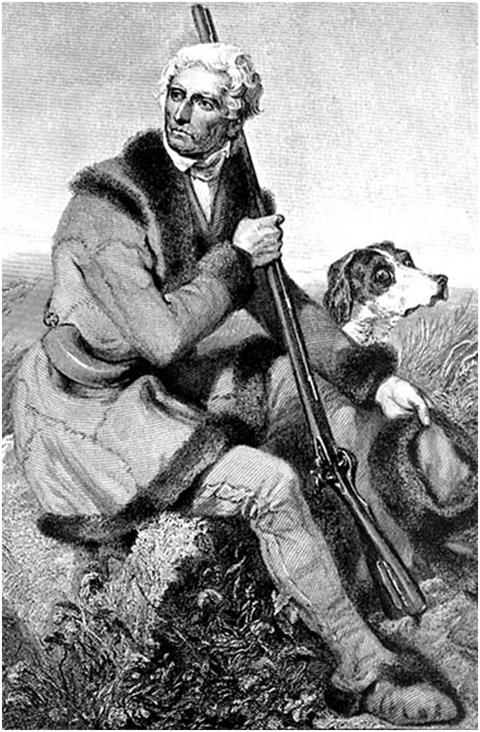 Most people think of Daniel Boone as a great explorer and hunter. Though he certainly was these things, he was also much more. Born in Reading, Pennsylvania in 1734, Daniel was the sixth of 11 children born to Squire Boone and Sarah Morgan. He took an interest in the outdoors at an early age and quickly became a good hunter, learning first to hunt with a handmade spear and later, with a rifle given to him by his father.

In 1750, at the age of 15, Daniel and his family moved to the backwoods of North Carolina. As Daniel became older, he started making a living by hunting. By 1765, four times as many people lived in the Yadkin Valley in North Carolina than when the Boones first moved there. The increase in people made hunting more difficult, and Daniel had to travel further and further from home to find game. Daniel also had a large amount of debt from taking out loans to buy hunting provisions. When John Findley approached Daniel about prosperous game in what today is the state of Kentucky, he decided to join the hunting trip and in 1767, went on his first large expedition westward. The land in Kentucky proved to be plentiful in game and was greatly appealing. Daniel permanently moved from North Carolina and sealed his place in history as the person who settled Kentucky.

Boone flourished in his new home. He held many government jobs including lieutenant colonel, legislative representative and sheriff. By 1799, Kentucky was becoming too crowded for the Boone family, so when they were invited by the Spanish to move to Upper Louisiana (present day Missouri) they gladly accepted.

When Daniel Boone came to Missouri, he was 65 years old. He brought his wife, Rebecca, and several of his children with him. Daniel acquired 850 acres located about four miles from the Historic Daniel Boone Home at Lindenwood Park. Though the home on our site is named after Boone, it was actually the home of his youngest son, Nathan Boone. Daniel appeared to have spent little time on his actual property, choosing rather to spend his time in his son's home. The home took several years to construct since it is four stories tall and the limestone walls are 2.5 feet thick. It was built in this way to provide protection in the event of an attack from the nearby Indians. While in Missouri, Daniel kept very busy at his appointed position as Commandant of the region and a Syndic, or judge. Daniel Boone passed away in the home on Sept. 26, 1820.

Missouri provided the Boone family with all the essentials they needed to survive: good land rich for farming and bountiful with trees and plants, natural water sources, and plenty of game to hunt for food. The Historic Daniel Boone Home at Lindenwood Park brings the story of Daniel Boone to life and helps enliven the frontier experience. Though life was quite different in the 1800s, the values of family, exploration and fortitude needed to face the hard life of the frontier remain just as strong and true today. Discovery has brought us far and it is people like Daniel Boone who helped pave the way.