Less well-known and feared than its famous sibling to the southwest, the Wabash Valley Seismic Zone is considered by some experts to be just as significant to residents of St. Charles County. According to experts at Washington University St. Louis, Wabash Valley seismic activity could pose more of a danger to the St. Louis area.

Many of the strongest quakes in recent years have occurred in Wabash Valley. Some believe the seismic zone is capable of producing "New Madrid-sized" earthquake events.

Most of the mapped faults are located in an area that extends from southeastern Illinois into southwestern Indiana and western Kentucky. More research will be necessary before the extent of the fault system is known, as the faults are located deep beneath 100-200 feet of alluvial soil deposits, and have few features that are visible from the surface. 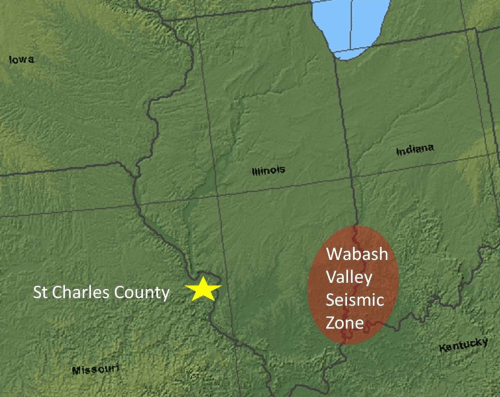 Currently, researchers have found evidence of ongoing quake activity for the last 20,000 years.

Geologists are able to study land features and project the size of the earthquakes that created them. Evidence of quakes estimated at 7.1 has been found in geological formations.

Effects in the Area

Earthquake activity in the Wabash Seismic Zone has a history of affecting the St. Charles and the St. Louis metropolitan area and its residents.

The November 9, 1968 Wabash Valley Zone magnitude 5.5, was the strongest in the central U.S. since the October 31, 1895 New Madrid Zone quake, centered near Charleston, Missouri. Moderate damage was reported in St. Charles and other parts of Missouri. Shaking was felt in 23 states.

Over the years, Wabash Valley quakes have produced effects in this region ranging from structural damage to shaking felt from the recent June 18, 2002, 5.0 centered near Mt. Vernon, Illinois and the April 18, 2008, 5.4 Mt. Carmel quake. Other Illinois quakes centered closer to the Missouri state line have resulted in reports of cracked foundations, residents thrown from their feet in the metro area, and produced turbulence on the Mississippi River.

Studies continue in order to learn more about seismic activity in the Wabash Valley Zone and throughout the central U.S. The important point for St. Charles residents and residents of the rest of Missouri to keep in mind is that knowledge is the first step to saving lives and reducing property damage. Preparedness is the next step.